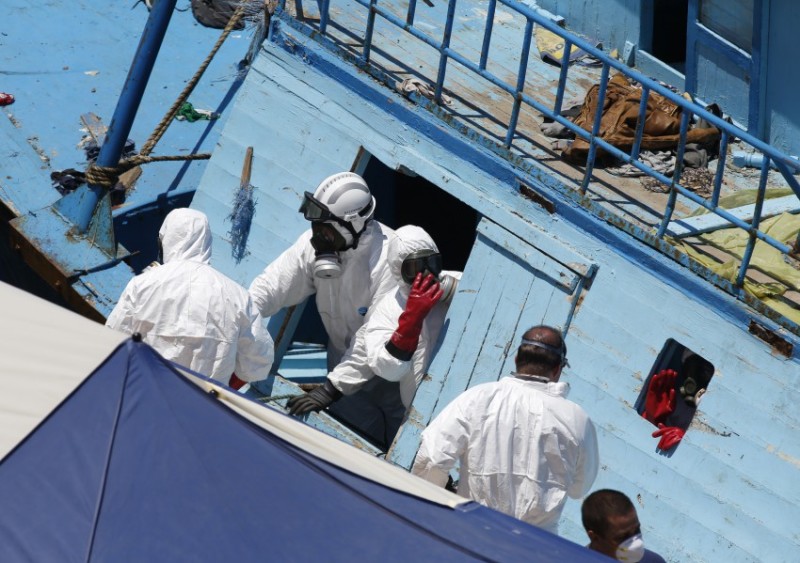 Hazmat and forensic officers work on board a fishing boat, on which 19 migrants are reported to have died, at the Armed Forces of Malta (AFM) Maritime Squadron base in Valletta’s Marsamxett Harbour, after it was towed to Malta by the AFM, July 20, 2014. Nineteen people died trying to reach Italy on a boat packed with hundreds of migrants, probably poisoned by carbon monoxide fumes from its engines, said the Italian Navy on Saturday, which has rescued more than 4,000 migrants in the last three days.

Covering the arrival of so many dead migrants was a sobering affair – all along we were under the impression that 19 migrants had died on this fishing boat and that 14 bodies were still on board, down in the hold. Later that evening, after we’d all filed our pictures and headed home, we learnt that 25 bodies had been brought out of the boat.

Now reports are coming in that over 180 migrants who were on that vessel may have died. It was a long day, starting at 7am and not leaving the scene before 3pm, all the while in blazing sunshine with little or no shade. We positioned ourselves on the bastions overlooking the AFM’s Maritime Squadron base as we were denied access to get up close.

The scene felt surreal to me, watching several hazmat and forensics officers in their protective clothing doing their work and eventually begin to bring out one body bag after another. Only a few hours earlier, I had been photographing a friend’s wedding till late into the night and the pictures were all about fun and celebration. Now I was witnessing this. Still, I guess I had it easy.

The scenes that the hazmat officers must have come across when they climbed into that hold, after hundreds of gallons of water had been pumped out to enable them to reach the bodies, must have been of indescribable horror.