Looking at the faces of the Syrian boys as they sit down in the RHIB, I’m immediately struck by how happy and relieved they look, albeit with a hint of apprehension in their young eyes, as they prepared to be transferred to a larger vessel that would carry them to Italy.  It’s a far cry to how they looked to me some hours earlier, when they also sat in the same RHIB being brought to the MV Phoenix for the first time.  Then, the fear, the panic and their screams sent shockwaves through my mind, even though I was concentrating on shooting pictures and video footage of the frantic rescue efforts taking place around me.

It was August 6.  A mere ten and half miles off Zuwara and inside Libya’s territorial waters, a heavily overloaded wooden fishing boat, carrying some 600 migrants fleeing towards Europe, had lost its rudder.  It was in imminent danger of capsizing due to its being top-heavy with hundreds of desperate men, women and children sprawled all over its deck and superstructure.

I had been on the MV Phoenix, a rescue ship operated by the humanitarian NGOs Migrant Offshore Aid Station (MOAS) and Médecins Sans Frontières (MSF), for several days patrolling the waters off Libya when the alert came in from the Maritime Rescue Coordination Centre in Rome.  This would be the second rescue mission in a couple of days. The first had run very smoothly – 118 migrants were rescued from a rubber dinghy in what was a textbook operation.  This latter one, however, had the potential of being a very different affair.  Only a day earlier, some 200 people were feared to have drowned when a similar wooden boat capsized and sank within minutes as a rescue operation went horribly wrong for reasons which remain unclear.  The Phoenix had raced to the scene of that tragedy to help search for survivors or bodies, but found nothing.

This time round, the tension as we approached the scene was razor-sharp.  The MSF ship Bourbon Argos and the Italian Navy’s destroyer Francesco Mimbelli got there first, but kept their distance until the more experienced MOAS rescuers could assess the situation and decide how best to intervene.  No one wanted a repeat of the previous day’s tragic disaster. 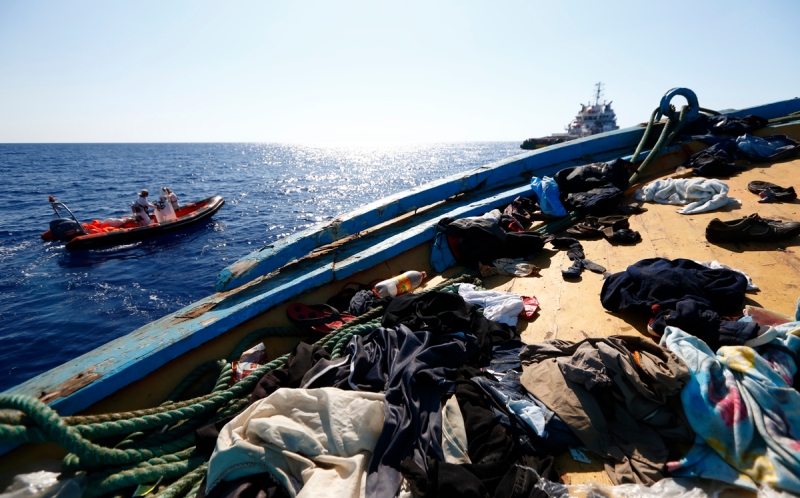 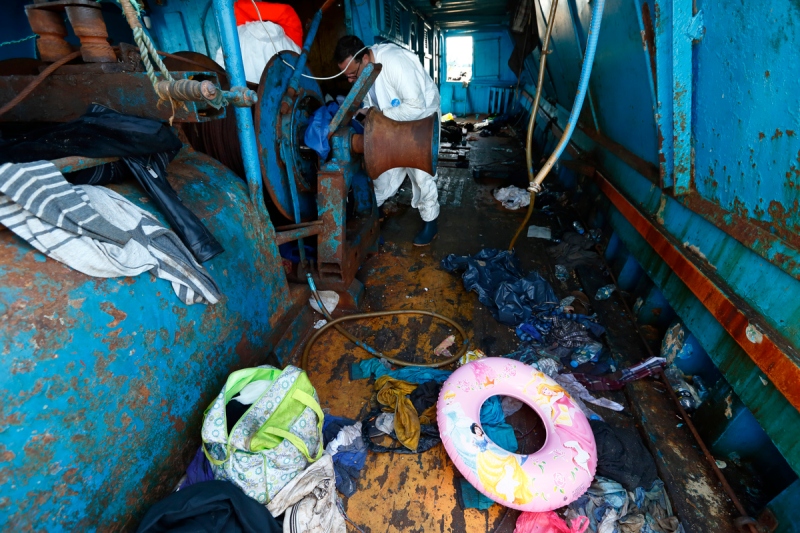 MOAS was set up and privately funded by American entrepreneur Chris Catrambone and his Italian wife Regina in 2014, after they had come face to face with the migration tragedy in 2013.  Last year, their ship MV Phoenix and its crew of highly experienced operators, saved over 3,000 lives during 60 days at sea.  This year, some 6,000 have been rescued to date.

The Phoenix launched its two RHIBs, each towing 25 metre long CentiFloats, inflatable buoyancy tubes which people in the water could hang onto.

As Phoenix drew nearer, through my long lens I could see just how dire the situation was – the wooden boat was rocking violently at times, people were jumping and diving off.  The rescuers on the RHIBs, now joined by units from the MSF and navy ships, were tossing lifejackets to the people on board.  Fighting to stop myself shaking with trepidation, I didn’t dare lower my camera, knowing that the boat could capsize at any moment.  Luckily, it didn’t.

Only when migrants started being bundled onto the Phoenix did I take my eye off the boat.  Then it was time to move in close with a wide-angle lens, and try making images that portrayed the frantic scenes of near-panic. The video from my head-mounted GoPro, which was running throughout the operation, captured the full scale and terror of the moment.  As I reviewed the footage some days later, the children’s screams sent me to a dark place.

Owing to the degree of urgency during the operation, I was unable to get as close as I’d have liked by getting on one of the rescue RHIBs.  I’d have been taking the place of someone who’s life needed saving.  Sometimes, the pictures have to take second place.

Once everyone was off the boat, I was able to get onto a RHIB and cross over to it and climb on board.  Scattered clothing, shoes, documents littered the deck but what really caught my eye was a Disney Princess inflatable swim ring.

By the late afternoon, 604 migrants had been rescued with not a single life lost – a very different outcome to what had happened the previous day.

REUTERS/Darrin Zammit Lupi
MALTA OUT. NO COMMERCIAL OR EDITORIAL SALES IN MALTA