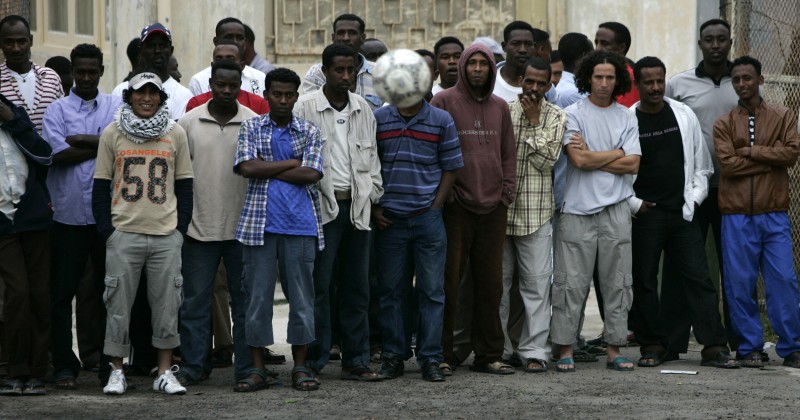 Migrants watch others from Ivory Coast and Somalia play in their version of a World Cup soccer final at the Marsa open centre for refugees outside Valletta June 11, 2006. Residents of the open centre from several African nations took part in the five-aside tournament as a way of joining in the world-wide celebration of the 2006 FIFA World Cup in Germany.

In keeping with the football mood everyone seems to be in at the moment, here’s another football-related image. I was down at the Marsa Open Centre where the residents were holding their own version of the World Cup, as the 2006 World Cup was being played in Germany. Apart from focusing on the action itself, I was also interested in capturing expressions of the spectators. What I liked about this picture is that it’s not immediately obvious what’s going on – it seems to show a group of migrants lining up against a wall to pose for a picture, until one notices the football in mid-air right in the centre of the frame.
Canon EOS-1D Mark II
Canon EF 70-200mm f/2.8L
Focal length 200mm
Manual exposure
Shutter 1/1000 sec
Aperture f/3.5
ISO 400