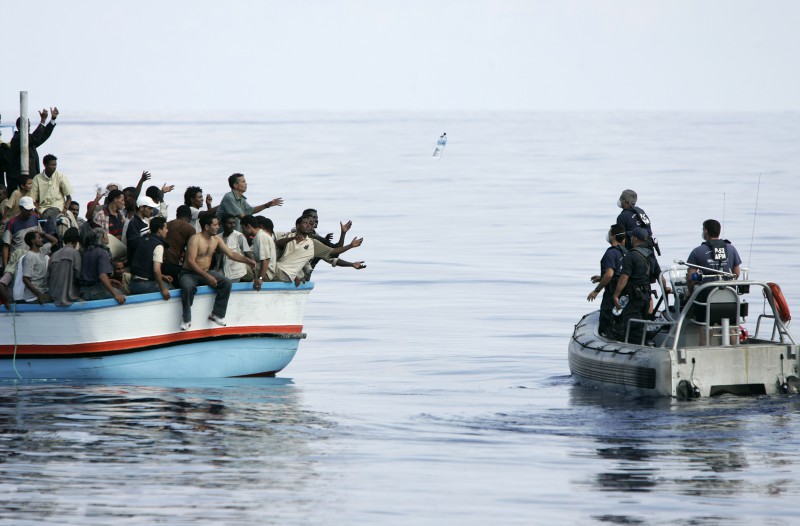 Armed Forces of Malta marines toss bottles of water to a group of around 180 people as a rescue operation gets underway after their vessel ran into engine trouble, some 30km (19 miles) southwest of Malta September 25, 2005.

I was at the bottom of the clay slopes at Gnejna training for my upcoming expedition to Mount Kilimanjaro on my day off when I received the phone call I’d been expecting for several weeks. It was the AFM’s Operations Room, and they’d just given the order to deploy a patrol boat to rescue a group of irregular immigrants stranded several miles off Malta. Having made prior arrangements with the army to accompany them on a rescue mission at the first available opportunity, I knew this was a chance I couldn’t turn down, though I had no idea how I would manage to get myself back up the clay cliffs, across Ghajn Tuffieha Bay to my car, drive home to Msida to collect my camera gear and reach the Maritime Squadron’s base in Pieta, all within half an hour. Being in relatively good shape at the time, I scrambled up the slope in record time, sprinted to the car, and then drove as fast as I safely could. Luckily this was before speed cameras were dotted all over the place.

To this day I don’t know how I made it, but I did. The Protector-class patrol boat had already set out to sea when I got to the base, but a couple of soldiers were waiting for in the boat’s RHIB (Rigid Hull Inflatable Boat), so I jumped in, and we sped off after the patrol boat, which was now outside Marsamxett harbour. Docking with it with a more violent impact than I expected (I know now that the soldiers did it on purpose as a bit of a lark), my camera bag and specs flew to the front of the RHIB, but everything survived in one piece. I clambered on board P52, introduced myself to the captain and other officers on board, and immediately got briefed on the situation. A boat carrying an estimated 180 immigrants was stranded some 30 kilometres southwest of the island after running into engine trouble.

A smaller patrol boat was already on site, and P52 was heading there in order to negotiate with the immigrants, and effect any rescue that might be necessary.
It took a couple of hours to reach the area. What first appeared as a little dot on the horizon soon grew into a sizeable fishing boat sitting dead in the very calm waters, packed to the hilt with people of all ages. Several were leaning over the side, attempting to drink sea water, something which would only dehydrate them further and eventually kill them. P52’s captain and a handful of crew members crossed over to them on the RHIB while the patrol boat kept around fifty metres away. It quickly became clear that the immigrants had no intention of stopping in Malta, and asked the AFM to provide a mechanic who could fix their engine so they could proceed towards Italy. Seeing their demands were impossible to accede to, they were left alone a while to discuss among themselves, while the Maltese patrol vessels monitored the situation from a short distance away. Meanwhile, soldiers brought several packets of bottled water up on deck, loaded them onto the RHIB, and transferred them to the immigrants’ boat, with the soldiers tossing a steady stream of bottles to the occupants.

I knew I was witnessing what no Maltese journalist had up till then, and made sure I had all the pictures I needed to illustrate it.

The 180 immigrants eventually agreed to be taken to Malta. Since then, I’ve covered several rescue operations out at sea. Yet of all the thousands of pictures I’ve taken of immigrants reaching Malta since then, the one I got that first day of soldiers tossing water to the desperate immigrants remains one of my favourites, making the front page of The Times the following morning, as well as being published in newspapers, books, magazines and online all over the world countless times.